Text Size: A A A
Text Only | High Contrast

A685 warning issued ahead of Appleby Horse Fair 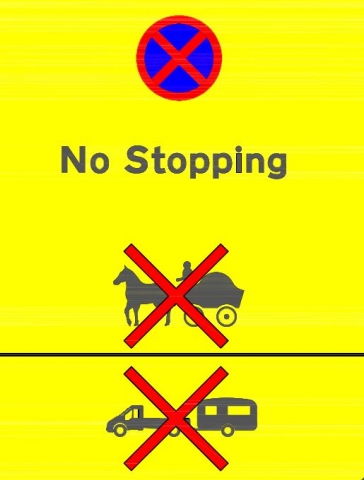 Gypsies and Travellers who stopped on the A685 prior to the Horse Fair last year are being advised that in 2019 certain areas will be closed to all camping - including motor vehicles, trailers and horse-drawn vehicles (see map).

Areas of the A685 identified as particularly unsafe for stopping will be clearly marked and strictly enforced (see image). People should also note that this includes horse-drawn vehicles, which cause the same level of obstruction and poor visibility as motors and trailers.

All verges on the A685 outside the prohibited areas will be monitored for obstruction of the highway, overcrowding of vehicles, danger to pedestrians, and badly tethered horses, and any vehicles causing a problem may be moved on.

Anyone who ignores the enforcement markings faces receiving a Traffic Offence Report (fixed penalty) and vehicles may be removed by recovery vehicles.

Eden District Council's Director of Corporate Services and Chairman of the Multi-Agency Strategic Co-ordinating Group, Matthew Neal said: “There are sections of the A685 along which it is simply not safe for anyone to be stopping and, as such, stopping there will not be tolerated.

“I would urge people in the Gypsy and Traveller community to help spread that message to anyone who is travelling to this year’s fair so they can make alternative arrangements.

“There are designated temporary stopping places. However, these are limited and we would ask people, wherever possible, to avoid coming to the Fair too early.”

A list of temporary designated stopping places, alongside information on some fields previously used which are no longer available, can be found www.applebyfair.org/travellers/stopping-places

RT @Cumbriapolice: Detectives investigating the incident in Battlebarrow in Appleby on Saturday afternoon (11 June) are appealing for… https://t.co/sv2LZOvrOG
2 weeks 6 days ago
RT @Cumbriapolice: Please be extra careful on the roads as people head away from Appleby Horse Fair. Slow-moving vehicles should be… https://t.co/G9D2kAm4vN
3 weeks 29 min ago
View More
FlickrTwitterFaceBook

How to get here