Text Size: A A A
Text Only | High Contrast

As Appleby Horse Fair 2019 winds down, people asked to take care on the roads 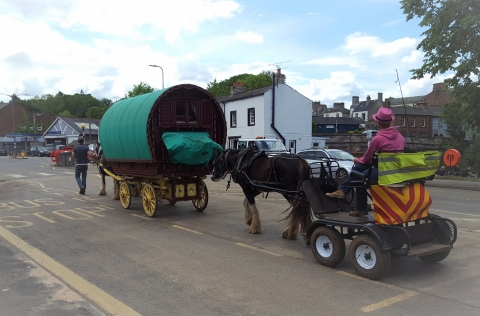 Despite heavy rainfall for most of Saturday, the number of caravans at Appleby Horse Fair held steady in 2019 at a little short of 1,200 caravans.

As always, the caravan count was conducted on Saturday. With some having already left by the time the count was undertaken due to the poor weather, the true figure was likely an increase on last year’s caravan numbers.

Chair of the MASCG, Matthew Neal, Director of Corporate Services at Eden District Council, said: "The multi-agency group has been meeting throughout the fair to bring together  the police, fire and ambulance services, local councils, highways, RSPCA and Environment Agency so that we are not working in silo but side-by-side to ensure the fair is as safe as it can be.

"The mood of the fair has been mostly positive and I would like to thank people for their patience when the River Eden ramp access was closed due to the heavy rainfall. The closure can be frustrating for people, particularly when the sun is out as it was on Sunday. However, the first priority of  MASCG is public safety and this is at the forefront of every decision and action the group takes.

"This year's fair has seen the different agencies which make up the MASCG go to unprecedented lengths to engage with the public before and during the fair, with regular community meetings being held in person and online. I can assure people that, as the fair draws to a close, we will continue to listen to their feedback as we seek to learn from each annual event."

Cumbria Constabulary increased its deployment of officers for the 2019 fair - both for the weeks leading up to the fair (Phase One) and the fair itself (Phase Two).

There were eight people arrested over the four days of the Fair, whilst more than 50 fixed penalty notices were issued for offences such as parking.

Temporary Chief Superintendent Rob O'Connor said: “This year’s Fair was no different to what we have seen in previous years. There has been some crime and disorder, but that is to be expected when tens of thousands of people come together over a short period of days.

“There have also been some serious offences which have taken place during and in the lead up to the fair. I can assure members of the public that these offences will be investigated fully by our detectives.

"I began the build-up to the 2019 Appleby Horse Fair by telling all communities that the policing of the fair would be 'firm but fair'. We really listened to what the public said last year and we increased officer numbers, installed CCTV in Kirkby Stephen and implemented a dedicated 101 line which has been really successful.

“I will continue to listen to the feedback we receive from everyone involved in the fair but I do believe we have delivered on the promises I made earlier this year.

"Overall I'm pleased with the way the policing operation has gone as a whole. We have had some extremely positive feedback from local people and from the Gypsy and Traveller community. As Gold Commander for the policing of the fair, that response is appreciated.

“Over the last few weeks my officers and staff have worked extremely hard, and I would like to thank them for their tireless professionalism.

"Finally, as Gypsies and Travellers return home we ask that everyone drives carefully on the roads around Appleby and beyond.”

RSPCA Chief Inspector Rob Melloy said: "We're pleased people have been heeding our warnings during the fair. For instance, this is the first fair in ten year's where we haven't come across or had reported to us any dogs locked in hot cars.

"We also appreciate the patience people showed, particularly on Sunday, when the ramp was closed.

"The fair covers a big area and, whilst we have a lot of people on the ground, it is impossible for us to cover everywhere. I would ask people who do have concerns at future fairs to come forward and contact the police if they ever witness anything which needs to be brought to our attention."

Speaking on behalf of Gypsies and Travellers, Billy Welch said: “This year’s fair has been really, really enjoyable. Lovely.

“The weather could have been better on the Saturday but it didn’t bother us that much and it was disappointing that the river had to be closed but it had to be done.

“The traffic has moved properly throughout and the one-way system worked well.

“Everyone involved has come together perfectly and worked together well. I've had so many good reports."

The Appleby Horse Fair 2022 date has been moved from its traditional date to avoid Queen's Platinum Jubilee celebra… https://t.co/VtgMsXaM9n
3 months 1 week ago
Likely to be slow-moving vehicles on the roads in and around Appleby today. Please take extra care when driving.… https://t.co/N1ai6NHCeb
5 months 4 days ago
View More
FlickrTwitterFaceBook

How to get here